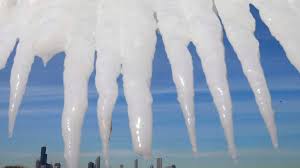 We model the fall of a piece of ice which is falling from a high building in New York City.

In a New York Times article  the author interviewed Frank Moscatelli, a clinical professor of physics at New York University, about the issues involved in ice falling from tall buildings in New York City.

``An object that falls from a building, such as a piece of ice, does not have to drop from tremendous heights to accelerate to dangerous speeds." Frank Moscatelli, a clinical professor of physics at New York University, said that ice could reach its maximum speed, between 60 and 70 miles per hour, from the top of a 15 - floor building.

``It would travel the same speed at that height as it would if it fell from the top of the city' s tallest building, 1 World Trade Center, whose spire climbs to 1,776 feet," Professor Moscatelli said. ``That's because of terminal velocity, the maximum speed of a freely falling object."

``But whether that ice bounces off a pedestrian below or crushes him depends on the size of the ice. When the object hits you at, say, 64 m.p.h., it matters if it' s a penny or a brick," Professor Moscatelli said.

Let us examine the claims made by Professor Moscatelli.