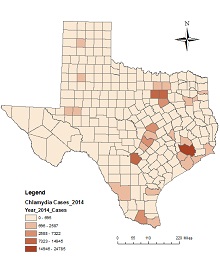 Summary:
Identifying, mapping and understanding the magnitude and the spatial prevalence of the Sexually Transmitted Diseases (STDs) such as chlamydia and gonorrhea diseases. Analyzing the spatial trends of the disease patterns at National, State and...

Among the industrialized countries, the United States has a relatively high incidence and prevalence of sexually transmitted diseases (STDs), and there is considerable geographical, racial and ethnic heterogeneity in the patterns and distribution of these diseases. Chlamydia continues to be the most commonly reported notifiable disease in US, with 1,526,658 cases reported in 2015 and increasing rates of reported cases over each of the last two years (CDC, 2015). Trends in rates of reported cases of chlamydia are influenced by changes in incidence of infection, as well as changes in diagnostic, screening, and reporting practices. Chlamydia, a bacterial infection caused by Chlamydia trachomatis, is the most prevalent STD infection reported in the United States and this disease is widely spread among sexually active women.   Gonorrhea is the second most commonly reported disease in the United States. In 2015, a total of 395,216 cases of gonorrhea were reported in the United States, yielding a rate of 123.9 gonorrhea cases per 100,000 population (CDC, 2015). Gonorrhea, a bacterial infection caused by Neisseria gonorrhoea, is the second most reported STD in the United States. Gonorrhea infection is mostly prevalent among adolescents and young adults. Infectious disease surveillance is a core public health function. Geographic information systems (GIS) have added an exciting new dimension to the epidemiology of infectious diseases. Maps of disease distribution and intensity allow an immediate visualization of the extent and magnitude of the public health. When based on empirical evidence, maps can support carefully weighted assessments by decision makers on the advantages and disadvantages of alternative courses of action.