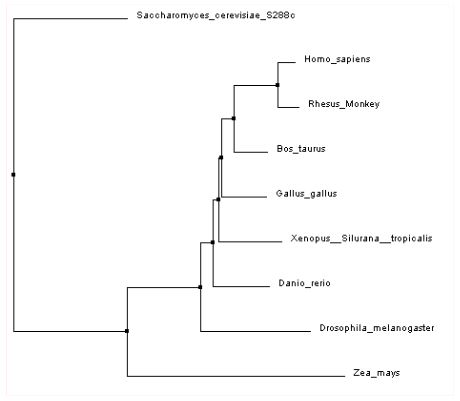 Bring Bioinformatics to Your Biology Classroom

Summary:
This adaptation of the sequence similarity resource provides biology students with a basic set of bioinformatics concepts and tools. These concepts and tools are used to explore relationships between Ebola virus strains.

Adapted from: Sequence Similarity: An inquiry based and "under the hood" approach for incorporating molecular sequence alignment in introductory undergraduate biology courses v 5.0

Ebola virus is one of the most devastating human pathogens.  It first emerged in 1976 in Zaire (Democratic Republic of the Congo, DRC) and Sudan.  It has been responsible for sporadic outbreaks since that time.  In most cases, the outbreaks are self-limiting and small in scope.  The usual pattern for an outbreak is infection of a small number of individuals followed by infection of family members and health care workers.  After the initial outbreak, high mortality and isolated geography leads to a diminishing number of infections until the outbreak ends.  Mortality varies between 40% and 95%, making Ebola one of the most deadly infectious diseases in humans.  In addition to high mortality, the disease course is devastating.  Ebola Virus Disease (EVD) begins with fever, headache, muscle pain, diarrhea and vomiting then progresses to hemorrhagic fever.  During hemorrhagic fever, there is major damage to liver, kidney, and gastrointestinal tract in addition to severe bleeding.  Fatalities usually occur as a result of multiple organ failure or shock due to lack of fluids.

The West Africa Ebola outbreak of 2014-2015 taught us much about Ebola.  We now know that Ebola has unique features that make it a source of worldwide concern.  Health agencies around the world, as well as the World Health Organization, responded massively and effectively to the outbreak.  This response is credited with reducing the mortality considerably, but still, 40% of those infected died from the disease.

A current Ebola outbreak in DRC has become a major public health concern.  The Ebola outbreak that began in August 2018 in North Kivu Province is still ongoing.  As of January 2019, with over 600 cases and 360 deaths, the DRC outbreak is now the second largest in history, but pales in comparison to the 28,000 infected and 11,000 dead in the 14-15 West Africa outbreak.  An experimental vaccine has been developed and is being deployed, as completely as the difficulties related to the current conflict in the region will allow, in the current DRC outbreak.  To develop the vaccine, it is imperative to know the strain of Ebola causing the current outbreak.

As part of our investigation of Ebola virus, we will use bioinformatics analysis to explore the Ebola strain(s) responsible for the most recent outbreak in Democratic Republic of Congo (DRC).

Exercises 1-3 of the Sequence Similarity resource, streamlined in this adaptation provide the bioinformatics concepts and tools that enable students to explore phylogenetic relationships among the known Ebola virus strains.  This exploration enables students to test the hypothesis that the current Ebola outbreak in DRC is caused by an known Ebola strain rather than a new strain.