The BioQUEST Curriculum Consortium began in 1986. The original idea for BioQUEST was conceived by John R. Jungck, Professor of Biology at Beloit College and Nils S. Peterson, CEO of From the Heart Software. An article on a “3P’s” approach (problem posing, problem solving, and peer persuasion) to learning biology appeared in the journal Academic Computing in 1988.

The first major funding was provided by the Annenberg/CPB Project with additional support from Apple Computer, Inc., the Foundation for Microbiology, and the Center for Biology Education at the University of Wisconsin–Madison. This support enabled Jungck and Peterson to assemble a consortium of biologists, educators, science education researchers, and computer scientists to develop twelve different Macintosh BioQUEST software modules and five other modules associated with existing computer software, all based on a unified underlying educational philosophy. This philosophy became known, in short, as BioQUEST’s 3P’s of investigative biology—problem posing, problem solving, and persuasion.

The initial funding from the Annenberg/CPB Project supported the project for a three year period of time, ending on August 31, 1990. A large-scale field test was conducted from 1990 to 1991 at 50 two and four-year colleges and universities and two high schools located throughout the United States. As the consortium members revised and refined the modules, the search for an appropriate publisher began. Additional field testing of revised modules occurred in 1992.

The Academic Software Development Group headed by Chad McDaniel at the University of Maryland, College Park was selected to publish The BioQUEST Library in a compact disk format. The first edition of The BioQUEST Library was released June 4, 1993. New editions continued to be published until 2006 when BioQUEST moved rapidly towards open access via the internet. 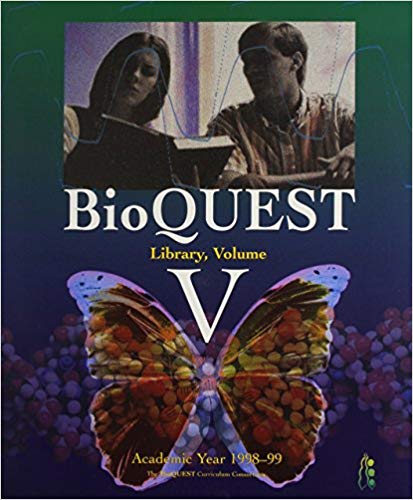 During the software development field testing period, the BioQUEST Curriculum Consortium conducted numerous workshops and presentations. The purpose of these workshops was to share the 3P’s approach to teaching and learning with other colleagues, and to demonstrate how software could serve as effective tools to enable biology instructors to implement this approach in their secondary or post-secondary school courses. BioQUEST workshops continue to function as an important means of addressing implementation issues that accompany the BioQUEST community’s curriculum reform efforts.

The workshop participants had the option of submitting materials that began to be developed in these workshops to The BioQUEST Library three stage review and revision process at an appropriate point in their growth or to BioQUEST Notes.

Each participant was asked to play a role in the dissemination process by either giving a convention presentation, conducting a local workshop, or writing an article for submission to a journal. This approach to dissemination helps to reach a variety of communities within the broad areas of science, education, and computer science.

2. The BioQUEST Curriculum Consortium: Enabling the Collaborative Development of Resources

In the spring of 1991, BioQUEST received funding from the National Science Foundation (NSF) program Undergraduate Curriculum and Course Development in Engineering, Mathematics and the Sciences, grant number USE-9150656. The funding enabled us to conduct our first BioQUEST Curriculum Development Writing Workshop in June of 1992. The purpose of this writing workshop was to provide time for a select group of undergraduate faculty to share ideas, to develop and write curricular or instructional tools, activities, and materials for introductory and non-majors undergraduate level biology courses based on the 3P’s. The conference participants were to break into small work groups to develop curriculum materials in the content area of choice in the following categories:

BioQUEST received continued support from NSF’s Undergraduate Course and Curriculum Development Program through grant number USE-9155885 for the BioQUEST Learning Tools Development Project. The purpose of this project was to promote: 1) curriculum and instructional materials development, 2) materials dissemination and 3) the establishment and maintenance of a viable communication network among biologists, science educators, software developers, and other interested individuals.

This second summer workshop was held June 5–13, 1993, at Beloit College. Thirty-seven faculty attended this workshop. Two-thirds of the of the invited participants developed materials and ideas with a view towards addressing the implementation of the BioQUEST 3P’s approach to the teaching and learning of biology and the use of computer tools and simulations in undergraduate biology education.

The focus of this workshop was ecology and evolution. Development occurred with attention to the diversity of two and four year undergraduate campuses regarding such issues as class size, availability of laboratory and computer equipment and supplies, student assessment, and transferability to real world issues. The participants felt that their work could reduce the considerable time, energy and expense that is associated with curriculum innovation and reform. One-third of the participants were primarily concerned with initiating the development of new projects in content areas where software tools and simulations would enhance the teaching of undergraduate biology. The participants establishing these new projects planned the scope of the project and negotiated a timeline for project work.

In April of 1994, the BioQUEST Curriculum Consortium received a two-year continuing grant from NSF’s Division of Undergraduate Education, Undergraduate Course and Curriculum Development Program. This funding enabled a third summer development workshop to be held on June 18–26 at Beloit College which was focused on developing curricula and learning tools in genetics and molecular biology. Forty-five college, university and community college professors attended this workshop.

The current phase of BioQUEST is more focused on creating faculty development opportunities to address the needs of our learners as they join a workplace in which both scientists and non-scientists require skills for accessing, interpreting, and making decisions with data.

The BioQUEST Curriculum Consortium continues to promote curriculum innovation by serving a national role as a networking resource for faculty members to share their work, collaborate with others, and create opportunities for cooperation among ongoing and new undergraduate biology education development projects.