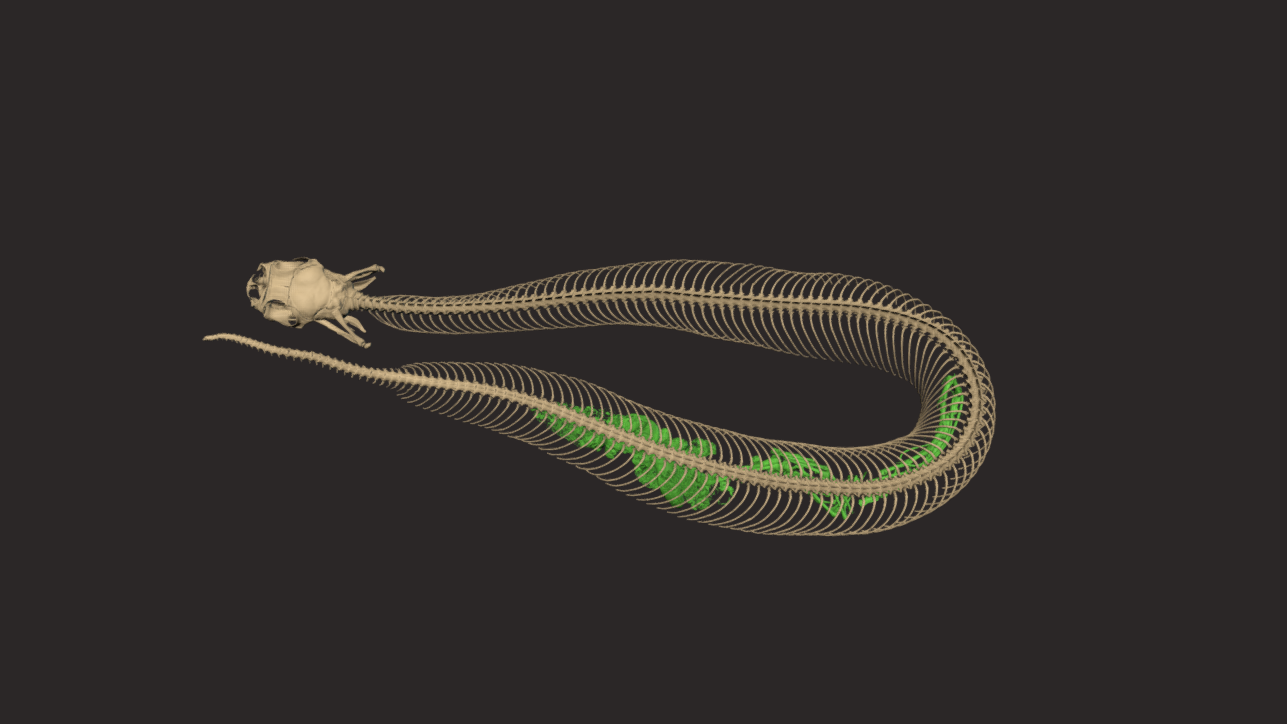 That Vertebrate Ate What Exactly?

Summary:
During the course of this lesson, students will analyze CT scan data and observe bycatch (or an unknown discovery) captured during the scanning process of vertebrates.

Analyzing data from various sources is one of the invaluable skills any scientist must utilize to make new discoveries. During the course of this lesson, students will analyze CT scan data and observe bycatch (or an unknown discovery) captured during the scanning process of vertebrates. Using the images created from CT scans, the students will formulate ideas about what bycatch data can reveal about their lifestyle of that animal.  Following the initial analysis the students will compare two separate CT scans of bycatch data and for the students to develop connections about known information of the organisms shown in the CT scans. Further extension of these first two phases will have the students will then compare the 3D pictures of the skulls, developed from CT scans of extant species of burrowing lizards, burrowing snakes and non-burrowing snake skulls. They will be tasked with relating the skull characteristics to the evolutionary history of snakes.

Subject, Grade, Level: This activity is targeted for high school classrooms, grade 9th and 10th for Environmental Science and Biology. The activity is created for both regular and honors classrooms. Extension questions are designed to help teachers utilize the lesson and alter the rigor level to their specific classroom.

Learning objectives: At the conclusion of this activity, participants will be able to:
1. Identify the general structure of a vertebrate skeleton.
2. Compare the known information about a vertebrate with the bycatch data in a CT scan.
3. Relate the anatomical structures and physiology of snakes to bycatch data.
4. Assess the skull changes of extant snakes with related species to their last common ancestor

NGSS Standards
HS-LS4-1.Communicate scientific information that common ancestry and biological evolution are supported by multiple lines of empirical evidence.
HS-LS4-2. Construct an explanation based on evidence that the process of evolution primarily results from four factors: (1) the potential for a species to increase in number, (2) the heritable genetic variation of individuals in a species due to mutation and sexual reproduction, (3) competition for limited resources, and (4) the proliferation of those organisms that are better able to survive and reproduce in the environment.
HS-LS4-4.Construct an explanation based on evidence for how natural selection leads to adaptation of populations.

Florida Sunshine State Standards
SC.912.L.15.1 Explain how the scientific theory of evolution is supported by the fossil record, comparative anatomy, comparative embryology, biogeography, molecular biology, and observed evolutionary change.
SC.912.L.15.5 Explain the reasons for changes in how organisms are classified.
SC.912.L.15.7 Discuss distinguishing characteristics of vertebrate and representative invertebrate phyla, and chordate classes using typical examples.
SC.912.N.3.5 Describe the function of models in science, and identify the wide range of models used in science.
SC.912.N.2.4 Explain that scientific knowledge is both durable and robust and open to change. Scientific knowledge can change because it is often examined and re-examined by new investigations and scientific argumentation. Because of these frequent examinations, scientific knowledge becomes stronger, leading to its durability.