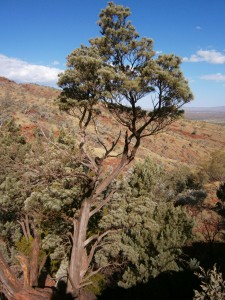 What Do Trees Know About Rain?

Summary:
The data nugget was introduced to a freshman General Biology lecture class as a culminating activity for the chapter entitled "Photosynthesis". Students worked independently and collaboratively to interpret the graph and answer questions.

At the time the module was presented to students, the chapter on photosynthesis was being covered.  The content of the module was very relevant but was not directly aligned with the concepts being learned in the chapter on photosynthesis.  In order to make the module’s content relevant, it was presented to students as a scientific skills exercise.  This allowed for previous concepts covered in class to be pooled into forming and framing answers.  Specifically, the student learning objective “Assess the natural world and propose evaluations based on scientific evidence using the scientific method” was being assessed.  This module was used as a formative assessment.

Before using the module, students were asked to review content learned earlier in the semester that addressed what is a hypothesis, the scientific method and how to carry out a scientifically sound experiment (hypothesis testing).  Students were given time in class to read the narrative on the research background and answer the first two questions: Scientific Questions and What is the hypothesis.  Once finished, students were asked to turn to their neighbor and explain what they read and how they answered the questions.  A couple individuals were then asked to share with the entire class.  Once it was established that everyone understood the research background, students started working on sections independently.  The module was broken up into three sections: 1. Scientific Data, 2. Interpret the Data, and 3. Your next steps as a scientist.  Students were given time to work on one section at a time.  After each section, students were then given the opportunity to discuss their answers with their neighbor and then finally, answers were discussed with the entire class.  This worked well because students could get confirmation and explanation of the answer(s) at each step before going on to the next section. This really helped in reinforcing and recognizing elements of the scientific process and key features of scientific inquiry.

The module was very useful in accomplishing the student learning objective.  Using the module did provide insights into how students interpret information and therefore frame answers; however, students were not very receptive to the content and were a bit fixated on it not being related to the chapter at hand rather than on the quantitative skills being highlighted.  The next time this module is used it will be introduced in the first week of classes as a culminating activity reinforcing the concept that scientists make observations and form and test hypotheses when studying nature.