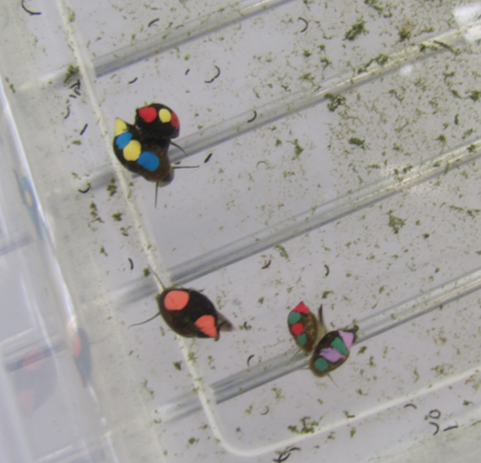 Summary:
This module explores the effects of host density on contact rates and transmission of pathogens or mutualist symbionts using a hands-on simulation, a computer agent-based model in NetLogo, and an authentic ecological dataset.

In parts one and two of this module, students use hands-on and computational agent-based models to create simulated data sets exploring the effects of population density on contact rate and transmission of pathogens.  Using tiny robots or their computer simulated equivalents in NetLogo, students manipulate host density and/or other population features and measure effects on contact rate and disease transmission. In Part three, students analyze an empirical data set similar to those they simulated with the agent-based models, containing ecological data on how snail contact rates change with population density. The data here are from a study by Hopkins et al. examining contact rates and transmission of an ectosymbiotic worm (Chaetogaster limnaei) among individual snail hosts of the species Physa gyrina, a common North American aquatic snail. Chaetogaster are small segmented worms that live externally on the headfoot of many snail species on every continent except Antarctica (Smythe et al. 2015). Chaetogaster are thought to be primarily transmitted during direct contacts (Hopkins et al. 2015).  To quantify how per capita contact rates change with host density in Physa gyrina snails, Hopkins et al. manipulated snail density in replicate tanks in the laboratory, using snails collected from Montgomery County, VA.  Snails were placed in densities of 1,2,3,4,…14,16, or 18 individuals per container, and researchers observed each container for 45 minutes, counting the number of contacts per individual. Three replicates of each density treatment were observed over six days of trials.