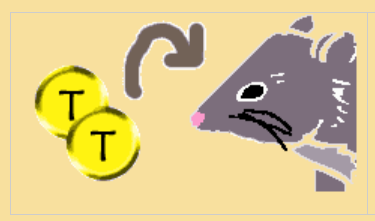 Summary:
This is an online activity that provides an introduction to Punnett squares as a tool for visualizing genetic inheritance. The ratios of possible genotypes and phenotypes in offspring are considered. Both monohybrid and dihybrid crosses are examined.

In the MathBench module on probability, the Laws of Probability were discussed that can be applied to, well, just about anything - rolling dice or determining the probability of survival, or playing the stock market, or genetics, to name a few. In this module, we're going to talk about another approach to probability, which is much more specific to genetics, called Punnett Squares. Punnett Squares were invented by one Reginald Punnett, a British geneticist who also studied ribbon worms and played cricket with G. H. Hardy of Hardy-Weinberg fame, one of the true big cheeses in the genetics world.

In this module, you'll see how Punnett Squares are really just a graphical way of reproducing the basic rules of probability.

You'll also see how to predict the phenotypic outcome from a multi-loci genotypic cross  in other words, how to predict what the kids will look like.