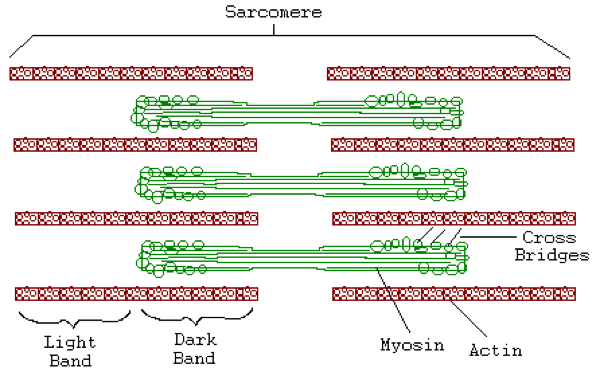 Summary:
This module introduces equations around muscle force in the context of understanding the Sliding Filament Model. It is intended for an introductory biology audience.

This activity maps to the OpenStax biology textbook, 38.4 Muscle Contraction and Locomotion

Student Introduction: Muscle fibers are composed of bundles of contractile muscle called myofibrils. Each myofibril is made up of smaller repeating units called sarcomeres. Thin filaments of actin and thick filaments of myosin from the muscle fibers. Myosin and actin filaments, as well as regions where the two overlaps, form repeating light and dark bands in each sarcomere. These thick and thin filaments are linked at regular intervals by cross-bridges made from extensions of the myosin molecules.

Researchers from 1930 to 1960 sought to understand the mechanism of muscle contraction. The "contracting filament hypothesis" proposed that the filaments themselves contract. Electron microscope observations, however, did not support this hypothesis. Neither the thick nor thin bands changed in length when the muscle contracted. Only the degree of overlap between thick and thin filaments changed. Huxley alternatively proposed the Sliding Filament Model, suggesting muscle contraction results as the crossbridges linking the actin and myosin molecules pull the filaments over one another.